Full Name
Sudhir Pai
Job Title
Chairman-Board of Directors
Company
Technology Collaboration Center
Speaker Bio
Sudhir Pai is Chairman, Board of Directors, Technology Collaboration Center, based in Houston, Texas.
In April 2021, he accepted a position as Head - Robotics, Automation and Sustainability at Axiom Space. Axiom will lead the design, development, launch, activation, and operation of the world’s first commercial space station. He leads the efforts of Humans and Robots successful co-existence in Space for a better sustainable life in Space and on Earth. He recently completed an exciting career at Schlumberger, world’s largest energy and oilfield services company, as Managing Director, Autonomous Robotics Services Business., He has strong interests in commercial aerospace, energy transition, health care, robotics, drones, Formula 1 and everything digital. He has held a variety of management, technology and business leadership positions within Schlumberger, including VP & GM of Completions business, GM of Schlumberger operations Mumbai India and more recently MD at Liquid Robotics Oil and Gas (LROG), a Schlumberger start-up JV. He has more than 30 years of worldwide experience including assignments in operations, corporate planning, supply chain, human resources, service quality, and health, safety & environment. He has worked in 9 countries including Middle East, India, UK and USA with focus on client relations, business & technology, service quality and personnel development. He holds a degree in electrical engineering from University of Bombay and an alumnus of International Space University, France. He is an active member of AIAA, National Diversity Council, Marine Technology Society (MTS) and Society of Petroleum Engineers (SPE). He serves on the executive advisory boards of SpaceCom, Subsea Systems Institute (UH, RICE, NASA consortium) and the Energy Drone & Robotics Summit. At SpaceCom 2020 he moderated a session on Space Tourism. In Jan 2021 he was nominated to the Commercial Spaceflight Federation (CSF) as a Patron. In April 2016, he was recognized by the United States National Diversity Council with the 2016 Texas Multicultural Leadership Award. In Mar 2015 he was a Agora Energy Innovation Pioneer at IHS CERAWeek. In 2014 under his leadership Schlumberger-LROG won the World Oil New Horizons Idea Award. He is attributed to several patents. He is deeply committed to World Alliance Solar Impulse Foundation and on the advancement committee at his daughter’s school, The Kinkaid.

In this position I intend to set and execute the Robotics strategy working with this incredeble team with the following vision:
- To take Space Robotics to the next level
- Humans and Robots successful co-existence in Space for a better sustainable life in Space and on Earth!

In doing so, I look forward to capitalising on the lessons learnt and practical experiences from the energy industry. A lot of the opportunities in Ocean and Deep Ocean are no different than in Space and Deep Space. Exciting times.
Speaking At
PANEL DISCUSSION: A practical approach towards IoT investment decision-making in a post-Covid world 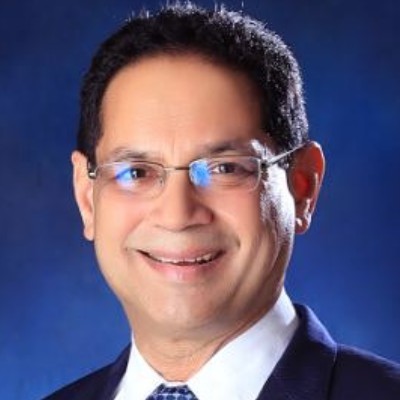